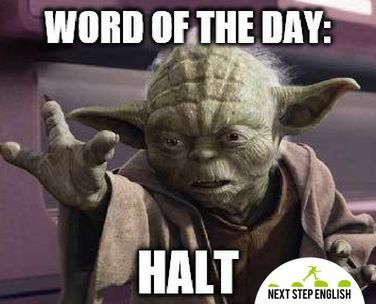 There is no trying, there’s only do or do not’ Yoda

Quite harsh isn’t it? When most of us are gripped by procrastination and fear about whatever it is we are trying to achieve. I wrote this blog a long time ago but realise its still relevant now. Whatever behaviour change you are trying to make, or project you are trying to complete – are you doing it – or not doing it?

Until I was reminded of that timely quote, I realised I have been telling people for ages that I am ‘trying’ to find the time to complete the novel’ ‘trying to seek out an agent to represent me’. I was asking everyone I could think of what I should do, when and how. The truth is I have been procrastinating, playing for time, because of the fear of being judged, what if the novel is utter drivel? What if I can’t get a book deal?

Of course I wouldn’t be the first, many successful authors have faced rejection before they found success but as I am always telling clients, Inertia won’t pull you to success…You don’t have to get it right, you DO have to get it going. The answer lies within you, that’s what we are always told, yet most of us doubt ourselves and look outside of ourselves for answers, advice, validation and assurance.

I’m not suggesting there is anything wrong with asking for help, seeking support and sharing with others, it’s critical in fact, but in recent years I’ve come to realise how important it is to trust your gut instinct, not just on the big things, but on the little things too and be willing to step out even if you feel a little afraid.

I love it when you read a book and a line pops out at you, it’s those lightbulb moments that make all the difference, recently I was reminded by Gabrielle Bernstein that ‘Energy flows where your attention goes’ and by Brendan Burchard that most of us are ‘driven by fear not freedom’. In ‘The Motivation Manifesto’ he talks about the ‘worriers’ – those members of your family, friends, teachers, peers, who mean well, they are thoughtful, loving and protective, but they are fearful and anxious so they don’t want us to tread anything other than the well-worn paths they have trodden.

If you are in the early stages of ditching the booze by the way its very important that you don’t allow family members to rain on your parade!

Brendan says ‘We must protect ourselves from being limited by those who care for us, as much as by those who blatantly oppose us’. If you’re a parent you will know about the agonising fear when your toddler first scales the dizzy heights of the climbing frame, you want them to explore but one hand is ready to dial 999 or rush to casualty when they come a-toppling down, as a mum or dad I’m guessing you didn’t ever wave your child off saying…’Have a great day, take lots of risks!’.

On the Hay House writers workshop Julia Cameron gave the participants a fascinating exercise to do. She calls it the ‘Obi-Wan Kenobi’ or ‘Yoda’ exercise, (if you aren’t a Star Wars fan you can call it Glenda the Good Witch). You probably remember scenes in Star Wars with Obi-Wan and Anakin where he expresses dismay that his advice isn’t being heard…

Obi-Wan says to Anakin…’Why do I get the feeling you’re going to be the death of me?’
He replies ‘Don’t say that, master. You’re the closest thing I have to a father’
Obi-Wan says ‘Then why don’t you listen to me?’
The idea of the exercise is to ask questions of your older wiser self, and then – here’s the important bit – actually listen. Write down what comes to mind and you could be amazed at the wisdom and how pertinent it is to what’s going on in your life.

Then you will know that it only takes a small amount of courage to get going on whatever it is that has been holding you back.

I couldn’t NOT borrow the fab image by the way, the word HALT comes in handy for anyone trying to quit alcohol, sugar et al, When the cravings come in, ask yourself, Am I..

May the force be with you