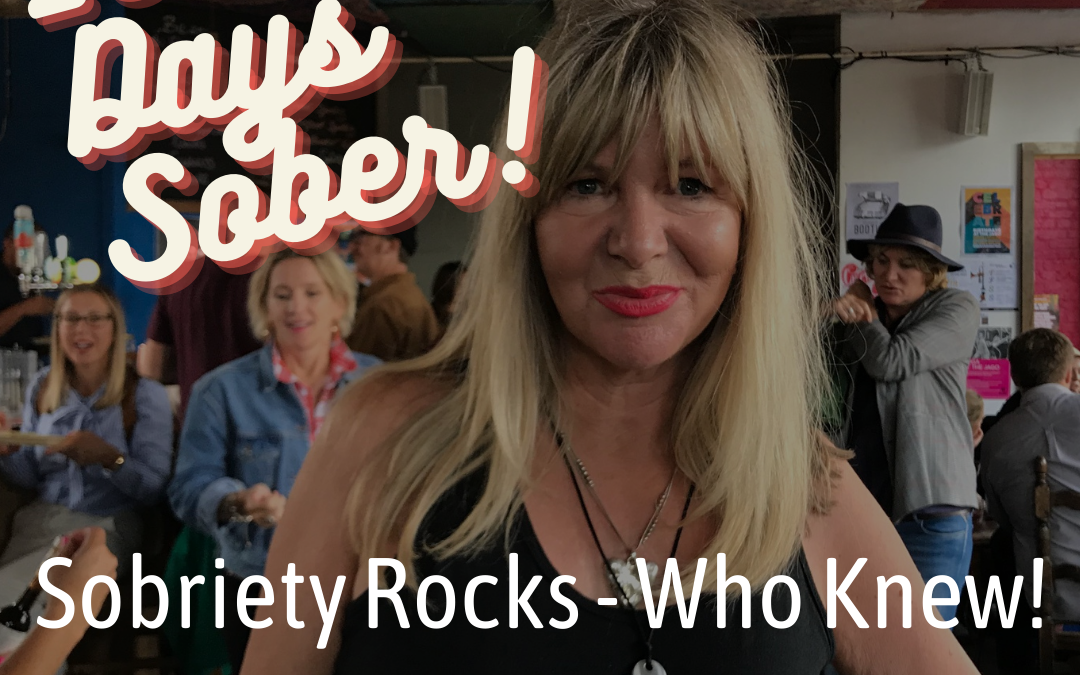 I could honestly never have imagined if you’d asked me three years ago, ‘Would I be happy without alcohol?

If you’d told me I would not only be sober, but happily so, and rocking a community inspiring others to ditch the booze I simply couldn’t have believed it.

As my TEDx talk Sobriety Rocks – Who Knew! says, I wasn’t a rolling in the gutter drinker, I didn’t ever have a rock bottom moment. I was what we now know as a ‘Grey Area Drinker’, there are many shades of grey on this spectrum (and none of them sexy) No-one else knew I had any issue, I didn’t really even get hangovers, I didn’t miss time off work, or drive under influence (God Forbid) but I did wake at 3am every day berating myself for drinking too much, yet again.

I’ve spoken at length about what kept me stuck in that ‘Alcohol trap’, For years I thought it was something wrong with me, I had bought into the brainwashing that tells us that ‘everyone else’ is a happy social drinker, who just loses it occasionally, I thought i was the only one who was clearly not coping, although I was on the surface. It was alcohol that kept me there, why? because its addictive, and its our societal norm, the glue that sticks everything together, I had bought into the BS, the illusion that alcohol was somehow glamorous, confidence giving, liberating,

Its only when I ‘caught sight’ of a better life without alcohol that the light came on, I’d always known the ‘logic’, that alcohol is responsible for 200 different illnesses and 7 types of cancer, (though I preferred the many studies that said a glass of red wine every day was good for you, I drank practically a bottle of white, but hey ho) I knew that people who didn’t drink looked and felt better, but for God’s sake, they had to be boring didn’t they ? Not cut from the same cloth as ‘rock n roll’ me!

I had totally bought into the anagram Sober = Bores

it couldn’t be further from the truth, since ditching the booze EVERYTHING is better, literally everything. Its not a magic cure all of course, but where as drinking exacerbates any physical conditions, not drinking gives you the clarity to be able to look head-on at what might be going on, and while alcohol is not necessarily the cause of mental health issues and anxiety, they are intrinsically linked.

So, over time, I lost weight, looked and felt fitter, got younger (I mean seriously, that’s my story and I am sticking to it, a friend thought I’d had a face-lift!) I found my anxiety dissapated, I felt more connected, much more present for my kids, and able to be a mum taxi at midnight (still working out the benefits of that one – joking, the first time I hopped in the car to get my teenager at 1 am I cried with pride) I was calmer, more productive, more kind, patient, resilient.

I was more brave. Drinking has shrunk my world so that I was scared of my own shadow, but at 7 months sober, I took myself off on a solo work conference trip to Canada, something I’d never had done before.

Many people have asked me the number one benefit of sobriety, and I think its finding Joy, from that one tiny word has sprung a whole new existence. I was never the kind of person who could ‘have fun’ or even really experience any kind of sense of wonder, or gratitude for every day things, I know now that my spirits had been dampened (they aren’t called spirits for nothing) and I had little or no self-esteem

When I first realized that I was feeling a sense of joy, it was liberating. there is something truly magical about waking up, that nano second of stillness while you process how you are feeling, only to get that stirring of …Woop woop, I’m sober!

Its a feeling that never gets old. I did wonder if after a year it would ‘plateau’ and be no big deal, but actually my second year sober has been remarkable, in what I have achieved and how I have felt, I’m told the third will be mega too, and on and on

I don’t bother to track my days now, of course I will celebrate my ‘soberversarys’ but 1000 days seemed like a big one, I have often wondered whether it will feel like less of a ‘thing’ but when I see Elton John proudly celebrating his 30 years of sobriety I think it probably will always be of paramount importance. Ditching the booze for me, was the missing piece of the holistic living jigsaw, for years I was ‘queen ‘ of natural health and wellbeing and yet there was this massive ‘elephant in the room’ that was actually holding me back. My only regret is that I didn’t do it sooner.

As one of my Sober Club members Lucy said recently, ‘I feel like I’ve been given a second chance at life’

If you’re interested in getting support, accountability and inspiration around living your best life without the booze, The Sober Club has members who are on Day 1 up to 6 years sober, because we focus on the ‘whats next’ from nutrition, to mindset to relationships, passion and purpose.

Get on the waiting list, and grab our free pdf Selfcare in Sobriety